Quartet of wins gives glimpse of the future

It was something perhaps unthinkable just a decade ago, but the picture on the KGV terraces on Thursday evening gave a glimpse of the future.

The TSL team had taken care of business and retained the treasured Fred House Perpetual Trophy, now it was the TSLW team's turn to shine.

With most of the 1100-strong crowd remaining, the women unveiled their 2018 premiership flag and then put on a show.

Madi magic
They tackled like a premiership team, drawing 'oohs' from the crowd with several crunching hits, but it was youngster Madison Shaw who really brought the fans to life.

Picking up a loose ball in traffic, the debutante left two Tigers defenders bamboozled with a pair of blind turns before snapping truly to the absolute delight of the Magpie army.

When veteran Nietta Lynch pulled in a crunching pack mark the crowd was again at full voice, 'Neets' on her way to a five-goal haul to lead her team to a thumping 67-point win.

Lynch's efforts were impressive, but it was the athletic Gen Sullivan who claimed the ANZAC Day medal for her exploits in the ruck. 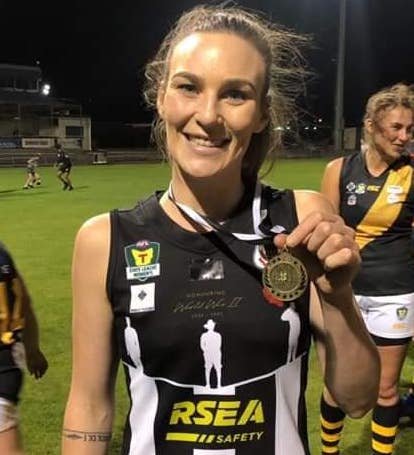 Midfield clinic
Sullivan dominated stoppages, setting free the fleet-footed midfield of Elise Barwick, Jemma Webster, Bri Barwick and Sarah Skinner as Glenorchy showed their speed and run will be tough to stop in 2019.

This is the first of three games where the TSL and TSLW will play on the same day, along with the Centennial Game on Friday 31 May v Clarence, and Saturday 17 August v Lauderdale.

As AFL Tasmania's umpiring numbers grow, a day of footy featuring U18s, development league, TSL and TSLW could become the norm, and judging by Thursday that future will be popular with Magpie fans.

Development demolition
Earlier in the day, the development team saw off a strong first-half challenge from the Tigers to run away convincing 46-point winners.

Teenage recruit Giacomo Millucci was the standout with a best-on-ground display, ably supported by fellow youngsters Brady Williams, Isaac Manson and Braydon Patterson as the future also shone bright in the early game.

Jack Stevenson and Trad Duggan continued their strong seasons in defence, Daniel Coppleman returned as a late replacement for Sam Hall and was his usual dependable self, while Zac Webster got plenty of the ball in his first game for the season. Youngsters on the march
On Friday night, the U18s made it four-from-four for the round, grinding down the more-fancied Tigers team to record a stunning 10-point win.

The result wasn't sealed until the final minute when a brilliant Jack Hills snap under pressure capped a relentless pressure performance in difficult conditions.

The win backed up their gritty four-point triumph over Clarence 12 days earlier, and the U18 team has now topped its win tally from the past two seasons.

Hills was joined by Nathan Blowfield, Ben McRoss, Ash Rowlands and Tom Allen as the stars of the night.


*The seniors, development team and U18s next return to KGV on Saturday 11 May against Lauderdale